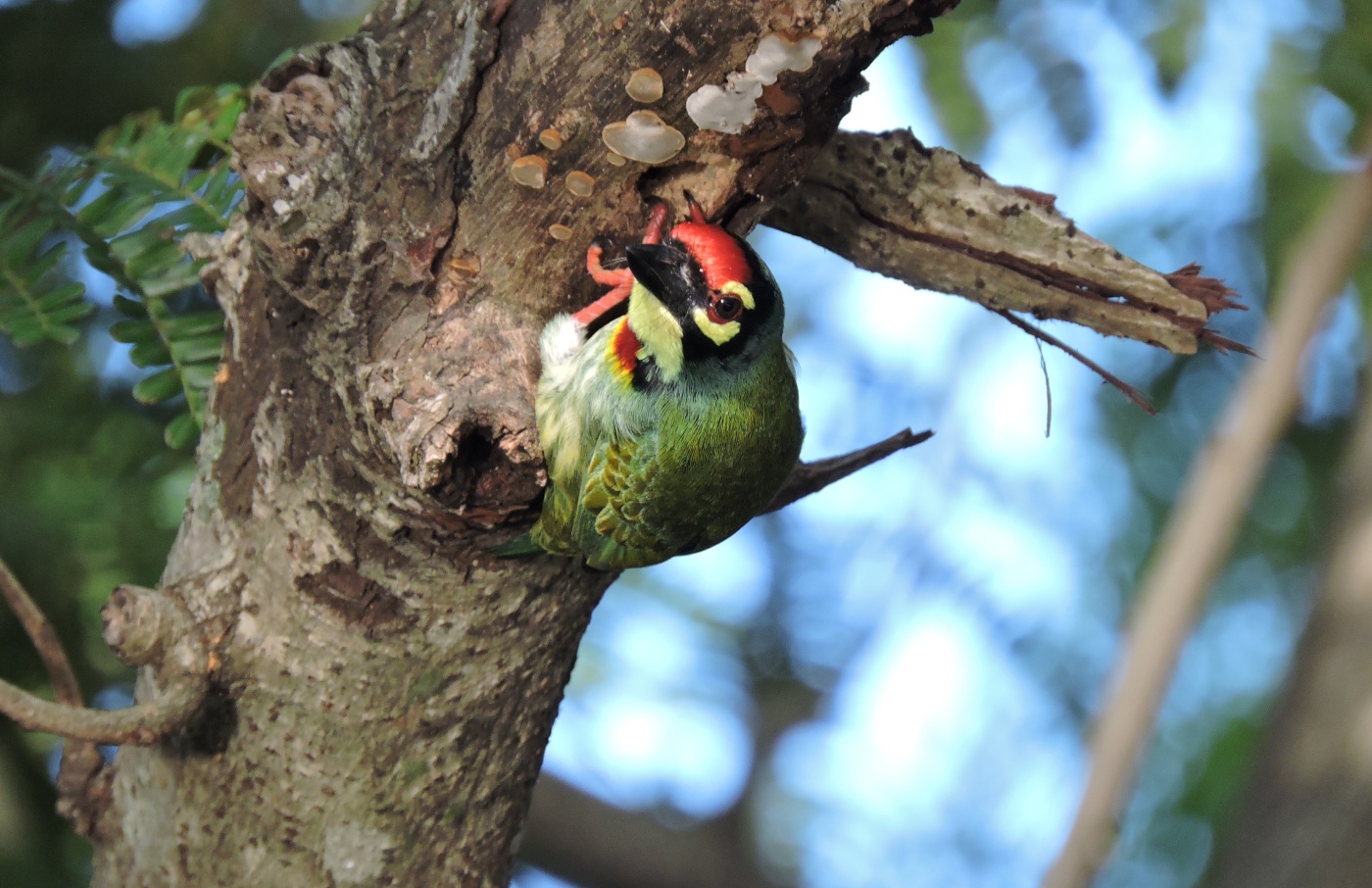 I first spotted the Coppersmith Barbet on a chilly morning, outside a bird sanctuary in Chennai. I followed its metronome call to a large berry tree. I saw the barbet feasting on wild berries in one of the branches. The long winter shadows had cast a spell over the leaves, and I was unable to revel in the barbet’s gorgeous features.

When I caught a better glimpse, its beauty took me by surprise. Its plum-red head shone, like lost treasure, as the tufted yellow rings around the eyes gave it a scholarly appearance. The upper part of its plumage was bathed in green and rinsed in grey. There was a streak of crimson near its throat too.

I could not help but mumble oohs and aahs in appreciation. I even made that sub-erotic hissing noise which comedians use in Kollywood movies when titillated via double-entendres. By the time I pointed the camera towards it – the Coppersmith Barbet had flown to another tree. 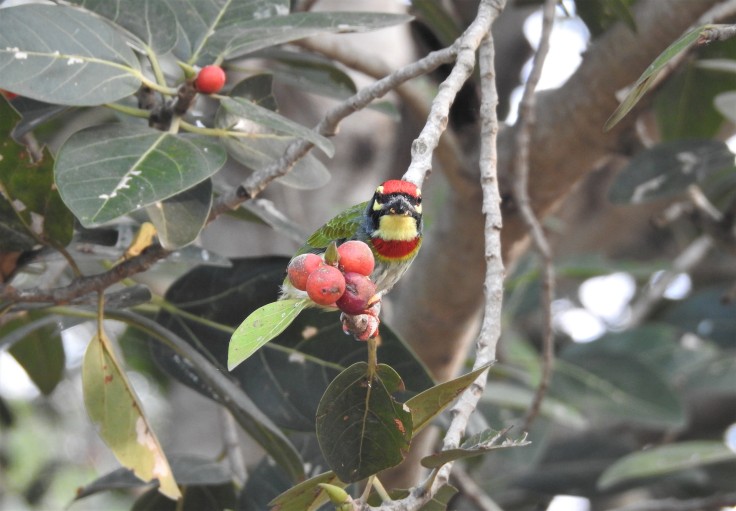 Then, I saw it land on a deadwood branch. And I squealed. Like children do when they meet adult-sized versions of their favorite cartoon characters at the mall. But the barbet did not fly away. I managed to take plenty of photographs of it, as well observe its intricate actions.

I used to scream whenever I saw a new bird. Unable to contain my excitement, I have scared them off their perches. After year one of birdwatching, though, I graduated to squealing while spotting lifers. These days, I palm my mouth to stifle the elation. Even so, a shrill cry escapes the corner of my lips. I cannot seem to limit my movement, and lower my voice.

I break the rules of birdwatching because I feel like a clay-animated puppet around them. With every move they make – a string is pulled. Losing track of what else I am supposed to be doing, I end up colliding with bystanders, slipping down ridges and stepping on poop.

Since my first encounter with the Coppersmith Barbet, I have seen it hundreds of times across southern India. Each time was special. It was not just because no two barbets looked the same.

The thing is that – no two squeals sound the same either. 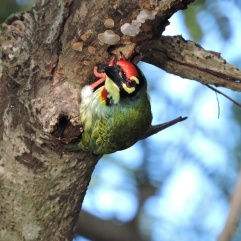 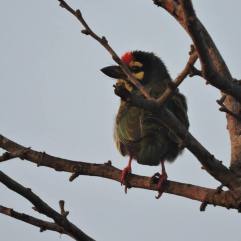 She took with her
plum-soaked kisses,
some pickled love and
a few other precious things
that she could use
to grow herself
a fresh pair of wings.

18 thoughts on “The screaming guarantees” 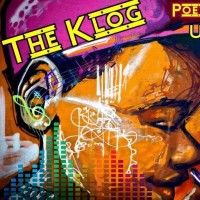 That look when rich Indians stock up on groceries, get back into reading & learn baking at home while making fun of poor Indians for spreading the virus because they're homeless & hungry. Yes, this is a Shikra giving you the finger. I tweet @twitter.com/contentbirder. #birds #Chennai #lockdown2020
My wife drew this because she loves me, but more importantly, she is sick & tired of hearing me crib about how I can't see owls from our balcony. All is fair in love & #lockdown. #atulipsart #birds #indialockdown #chennai
Bring home the moon. Add a teaspoon of rum. Slow-cook until it resembles a plum. I tweet @twitter.com/contentbirder. #supermoon #moon #moonlight #hills
Over the weekend, I was amazed to find an Orange Breasted Green Pigeon in the outskirts of #Chennai. I had no idea that it even lived here. Well, if I had a rupee for everything I didn't know, I would have bought an island and moved there. "The more I learn, the more I realize how much I don't know." I tweet @twitter.com/contentbirder. #birds #birdwatching
The moon snuck around at dawn, like a faceless emoticon, leaking cream cheese & torch songs. I tweet @twitter.com/contentbirder. #fullmoon #fullmoon🌕 #moonlovers #moon #Chennai
We're in this together. The #NewYear isn't going to be any different. Basically, you've two choices. 1) Make it about yourself & alienate those who disagree with your views, including total strangers who don't know you exist, while contributing zilch to make things better. 2) Realize it isn't about you and use your privileges to raise awareness, starting with your friends, family members & colleagues, so that future generations don't need to go through this crap. Keep calm & communicate with empathy in #2020. #RedAvadavats #birds #birdsofinstagram #Chennai
I saw a Spotted Owlet pair cuddle so adorably that I considered leaving them alone. But I didn't. Then, I thought I shouldn't post the photos. Well, I did something worse. I made a music video. And I'm posting it on Instagram, which is no longer my preferred social media platform (follow me on Twitter @contentbirder). Clearly, I need to be more decisive. For now, enjoy the #owls. #Chennai #birds #birdwatching
Indian White-Eyes bathe in the dewdrops that gather underside the tips of spindly leaves. Then, they drink nectar from the flowers or feed on insects that lounge nearby. In return, these #birds help the plants pollinate. The #SeasonOfGiving isn't a festival. It's a state of mind. #birdwatching #nature #Kodaikanal
You can't look down on people & expect them to look up to you. When you alienate them, you kill the chance of having a sincere conversation. No matter what you think, we're in this together - all of us. We can go a long way with a little bit of kindness & respect. #SpottedOwlets #owls #birdwatching #Chennai

Stuff my brain brings up during coffee breaks

Off Center & Not Even