Last October, years after being swept off my feet by the birds of south India, I fell in love again. I was cruising on a Sunday morning in hope that I could spot pelagic birds. At a distance, I saw a gathering of winged creatures near a residential plot on the highway. Getting closer, I knew that it was a swarm of Crimson Roses. I recognized them because I had seen these red-bodied swallowtails many times before. But I had never given thought to how gorgeous they were.

This time, I was held captive by their anatomies that shone like sundae toppings. Mesmerized, I watched them ferry pollen from throats of flowers. I felt the lump of love inside my own.

Soon I started to notice that the flowery hedgerows had attracted other species of butterflies too. Scouting the bushes, I saw one that could have been a paler cousin of the Crimson Rose. Nearby, a large fella – bathed in blue – landed on a leaf, followed by another that resembled a caramel pancake fresh off a low flame. Then, there were a few who might have metamorphosed, during the twilight hours, into stained glass paintings.

Decorating the air with splashes of color, they awakened me. I tried to take some decent photographs, but they were too quick for me. The sun, flaring its nostrils, did not make it easy either. It took me some time to figure out that they flap their wings differently from how my feathered friends do. Tracking them required a more intuitive eye. I had to learn to respond quickly by predicting their next move. I do the same while photographing birds in flight but they belong to a more generous canvas – and with fewer distractions.

I ended up with a few snapshots (with the glare edited out) that, hopefully, offer some evidence of their beauty. 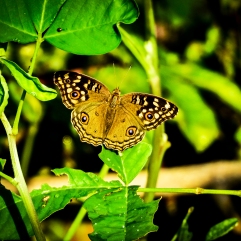 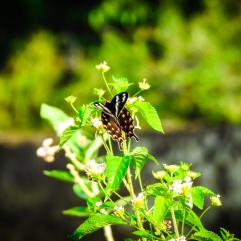 I continued to loiter within a radius of 500-meters for about two hours. I took mental notes on the little things they did. Their group dynamics during a nectar run. The approximate amount of time they spent on each flower. If they followed flight patterns I could recognize; if their antennas made a whooshing sound when the breeze turned stiff. And if their long-chambered hearts had enough space to accommodate my feelings for them.

After having my fill, I got into the car, and I ran my fingers across the steering wheel. The indigestion of love had made me tipsy. I wondered what the birds would think if they ever found out that I had fallen for another species.

Would they, in defiance, change their tunes around me? Or would they be overjoyed that they have one less stalker to worry about? Or is there a policy for the winged type to take turns seducing the two-legged kind?

Before returning home, I bought a copy of the Naturalist’s Guide To Butterflies, which is a first-course meal for any aspiring butterfly-watcher. I thumbed through the pages in hope of identifying the ones I had spotted.

It turned out that I had encountered a Lemon Pansy, a Common Mormon, a Common Jezebel, and a Great Eggfly. Each one had a pair of wings that told a different story. Like the birds I adore so much, each one had its own unique style of administering a coup de grâce of love.

There are butterflies in my tummy.

Like pieces
of bird plumage
strewn aside,
like dead leaves
leaping to life,
my panoramic
lepidoptera
of the
precious
kind.

20 thoughts on “Falling in love can give you butterflies”