The daily challenges faced by many people in my country do not bother me as much as they used to. Because I let go of the guilt of having had a more privileged upbringing. And I am not skilled enough to fight the system by tweeting about how unfair everything is.

What really bothers me is when the unwritten rules of social conduct are broken. For instance, some of us try to get inside the elevator even when its doors are closing. We do not consider it impolite to ask people to delay their routines because of our selfishness.

Why must anyone set aside their priorities to deal with ours? We are not chasing after Mad Max in a lawless dessert. Unless there is an emergency, we must follow certain rules of social conduct. We simply cannot be inconsiderate of the lives of strangers. Whether or not they can fly is a different matter altogether.

Pied Bush Chats are small passerine birds that are widespread in Asia. Once a part of the thrush family, they are now considered as Old World Flycatchers.

I first encountered the male at the Vedanthangal Bird Sanctuary sometime in 2013. He looked like a large-sized robin with the darkest plumage I had ever seen. Soon the female appeared from behind the bushes, looking like a chubby sparrow. Only upon reaching home, I found out they were known as Pied Bush Chats.

For the next two years, I saw them on several occasions. I stalked them each time until I was sure that they were not a plumper version of other species. One fine day, I decided to stop photographing them for good. Because I wanted to quit being a nuisance to a few birds, at least. Bird-watching can be an intrusive affair when documentation, unrelated to conservation. is an important part of it. 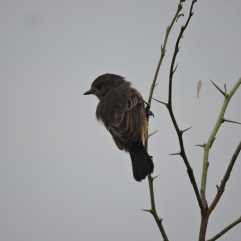 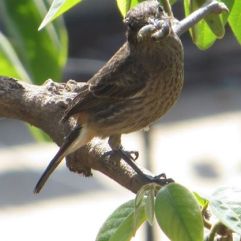 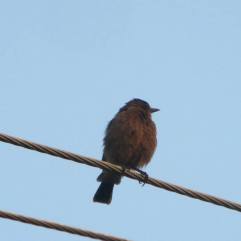 I took my last snapshot of it, during the winter of 2015, on a misty morning in Vattakanal. I stood outside a cottage, waiting for the right moment to capture a gorgeous couple in the middle of a feeding frenzy. I shot a few photographs, but daylight was dim. So, I left in peace and hoped that I would not disturb their routines again.

Last week, I had seen a strange little birdie on a tree at a distance. It resembled a sunbird, but when I had a closer look – I could not identify it. Excited, I sent one of the photographs to a professional birdwatcher. Quickly, he replied – saying that it was a juvenile Pied Bush Chat.

I made that face that Wile-E-Coyote does right before he falls off a cliff.

Now, I cannot decide. Should I put away the camera when I spot them the next time? Or fall in love all over again by photographing them some more? 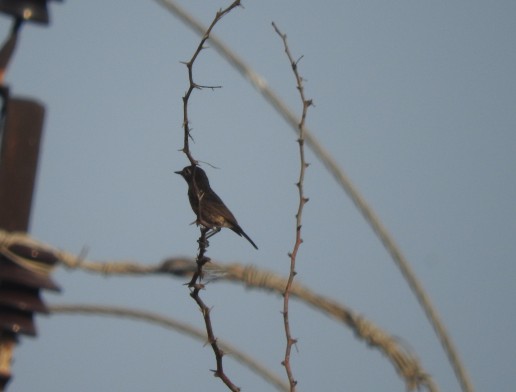 Similarly, it used to be so much easier to pick a point of view about the state of national or international affairs. Today, I lack the confidence to exercise my basic right to vote in the country I was born in. Because words like “progressive” or “conservative” have turned into bandwagons. They mean nothing. We live in the age of the extremist. Left or right, we seem to have a close-minded narrative.

We fight for freedom of expression only if it corroborates our opinions. We call for censorship just because our viewpoints are different. How dare we see the shades of gray only while exercising some artistic license or while taking a personal decision that has us questioning our moralities? How do we then, with neither shame nor conviction, talk about race, politics, and economics as though the rules are clearly etched in black and white? We are capitalists and consumers more than communists or rebels. Pawns, not soldiers. Yet another sectarian cog that keeps the giant wheel of globalization in motion.

We can pretend all we want to, but we are not fighting the system. We are the system.

But, just because we lead institutionalized lives – that does not mean that we should be discourteous to each other. The last thing we should do is make things worse by being rude, greedy or petty.

So, the next time you are late to reach the elevator, please stop in your tracks and smile at those inside as the door closes.

Do it for yourself.

Do it for the Pied Bush Chats.

Do it for a better world.

7 thoughts on “United we fall”