In 2013, I saw a large squirrel hiding in-between the branches of a plum tree in Kodaikanal. Bashing its bushy tail against the leaves, the creature stared at me with its beady eyes. Its reddish-black coat  shone in the sun. I had never seen anything like it before. The only squirrel I knew then was the three-striped palm sub-species.

When it leaped onto another tree, a taxi driver – standing nearby – pointed at it and said, “There it goes”. He looked at me and asked, “Ever seen a Giant Flying Squirrel before?”  I shook my head sideways and mumbled. Words escaped me. I was shaken. I felt like I was on the precipice of something strange and important. It was the only time I ever wanted to write a novel.

But the squirrel had other plans for me.

A few weeks after the encounter, I excitedly started on a full-length novel. A story about an amateur trekker who gives up his corporate career to spot a leopard in the wild. It was loosely based on my own experience. And the squirrel was one of the recurring characters. My spirit animal that shows up during the likeliest of circumstances.

I wrote about six thousand words in a short while. Because I enjoyed the process. It was hypnotic. I was so immersed in it that I made a fundamental error. I hadn’t spent any time on research.

And I had mistakenly referred to the Malabar Giant Squirrel as the Indian Giant Flying Squirrel.

I hadn’t bothered to double-check with anyone, not even a search engine. I was more interested in completing the novel. Giving my protagonist some closure. Soon, I began to despise him, and anything he had stood for. I wanted him gone from my life. Out of my mind.

Furthermore, when I read the finished chapters, I hated their contents too. What once had seemed clever or poignant came across as pretentious and hare-brained. And I just couldn’t go through with it. Three years later, I haven’t added a word to the novel.

But whenever I see a Malabar Giant Squirrel, I feel overjoyed. I giggle to myself. The mistakes I have made. The love I have received. Everything feels alright. 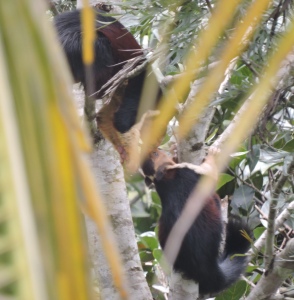 In 2014, the Indian Giant Flying Squirrel finally glided into my life during a hot summer night in Mudumalai Wildlife Sanctuary. It just came out of nowhere.

A friend and I had spotted it. I wanted to use the flash option in my camera and shoot a photograph of it. But I couldn’t bring myself to. In the process, I found dignity in waiting for the right moment without being a jerk about it. So, I am sure that I will photograph it some day.

As for the giant that I am more familiar with – well, once smitten, twice shy; even the grayest of clouds shan’t cast a shadow over the sunshine of my love.