I had for too long kept myself from falling in love with Indian Mynas. Perhaps, I am not just a discriminatory birder. I am an obtuse one too. I hadn’t written about them until recently despite how often I spot them.

Common Mynas are found everywhere in my city. Unlike the House Sparrows, they have adapted to urban environments; so much that they have gained a reputation as one of the world’s most invasive species. 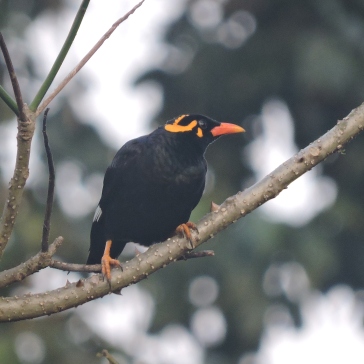 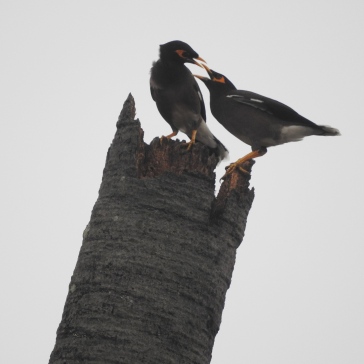 I have also seen these birds across the hills of southern India. Flocks of majestic Southern Hill Mynas are common sights as are Jungle Mynas, my pocket-sized sweethearts.

They are extremely territorial birds. Often I have seen them pick up fights with Drongos, Parakeets, and Barbets for trespassing through their hallowed grounds. It’s a behavioural trait that they must have picked up from us. With human beings for next-door neighbours, it had probably occurred to them, a long time ago, that self-preservation triumphs peace, love, and harmony.

They are loud with their calls. But they aren’t noisy. Just a cacophony of alarm clock melodies. They are great at mimicry too, often fooling birders by impersonating other species of birds. 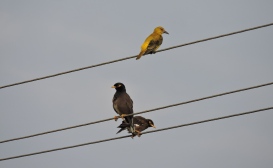 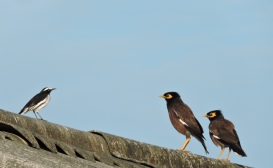 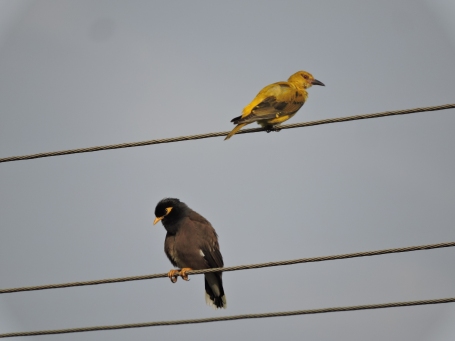 Last year, I had travelled to Masinagudi via the bird-friendly Bangalore-Mysore road. I took a break near the sunflower fields of Gudulpet. I was mesmerized by the way the lemon-skinned ballerinas danced with the wind. And I chanced upon a Common Myna perched on a giant sunflower.

She was either feeding on insects or whispering secrets to the petals.

And it hit me like a ton of bird poop. I had been blind to how beautiful she was. I had seen her so often that I had taken the beauty in her for granted.

If I had to make
a case for this commoner,
I would start with presenting
her dark copper feathers
as exhibit A and B,
argue over the white streaks
in the underside of her wings,
and end with a closing argument
about the freshly-squeezed sun juice
in-between her cheeks.

30 thoughts on “A case for the commoners: The Indian Myna”