Whenever I spot rare birds, I am giddy with joy. My confidence begins to build. I realize how much they mean to me. And I start to emotionally invest in them. But if they decide to leave before I can take a photograph, whiffs of anguish flood my nostrils. As they disappear into oblivion – I pull a face and swat imaginary flies. I feel dejected.

It’s like being punched in the eardrum while swimming. I am disoriented.

In a few hours, the melancholic vibe is replaced by a twinge of guilt. I realize, rather sheepishly, that I have spotted three endangered species of birds in southern India. Besides the hundreds of endemic and migratory birds, I have also seen a few – notoriously secretive about their lives. 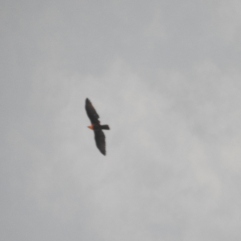 The Red-Headed Vulture and the White-Bellied Blue Robin even magnanimously posed for me. Only the Kashmir Flycatcher didn’t stay long enough for a photograph. I saw a rare Peninsular Bay Owl too. But I had to pay a professional birder to find her. It doesn’t count.

But I can’t complain. I don’t do much to make our planet a better place for birds. Apart from placing bowls of water on the terrace during summers, I do nothing at all. They don’t owe me any sort of generosity, much less a sighting of their wildest and rarest family members.

I should be grateful that I even get to see crows and pigeons .

I can’t let it go, though. For instance, I still ache to find Austen’s Brown Hornbill – an extremely rare bird found only in the Brahmaputra valley. I want it so much that I forget that I have spotted three different species of hornbills in less than three years.

To bastardize a joke I once read, letting go is like losing a tooth. Even though it is gone, I run my tongue over the base, thinking there is a chance that it may feel good in a strange way.

Never weep over
a wounded rose,
she will only catch a cold.